How Can Agile Support Business Agility?

At the end of 2012 Iberia Airlines embarked on a transformation to return to profitability. Some of the highlights of the transformation plan were:
1.    Stem Iberia's cash losses by mid-2013.
2.    Turnaround in profitability of at least €600 million from 2012 levels to align Iberia with IAG's target return on capital of 12 per cent by 2015.
3.    Network capacity cut by 15 per cent in 2013 to focus on profitable routes.
4.    Downsizing its fleet by 25 aircraft - five long haul and 20 short haul.
5.    Reduction of 4,500 jobs to safeguard around 15,500 posts across the airline. This is in line with capacity cuts and improved productivity across the airline.
6.    New commercial initiatives to boost unit revenues including increased ancillary sales and website redesign.
7.    Discontinue non-profitable third party maintenance and retain profitable ground handling services outside Madrid.
8.    The transformation will be funded from Iberia's internal resources.

Basically, Iberia needed to pivot – and pivot hard and fast. Here is a quote from Rafael Sánchez-Lozano, Iberia’s CEO: “Time is not on our side. We have set a deadline of January 31, 2013 to reach agreement with our trade unions. We enter those negotiations in good faith. If we do not reach consensus we will have to take more radical action which will lead to greater reductions in capacity and jobs”.

Negotiations with the union were ultimately successful and the company has nearly returned to profitability. One of the reasons cited for the success was that, “Iberia’s move to make 3100 staff redundant and axe 23 aircraft helped it cut its operating loss by €185 million to €166 million.” [http://www.independent.co.uk/news/business/news/iag-returns-to-profitability-on-iberia-overhaul-9160554.html] But according to the same article, “…cargo revenues collapsed by almost 12 per cent, and Walsh [CEO of IAG – Iberia’s parent company] warned not to expect too much, too soon. ‘It’s going to be a better year, but the environment is still lower than where we were at the peak.’ ”

From the article, “BMI and Vueling have been the only acquisitions, and today Walsh added: ‘We haven’t got anything planned at the moment, but we are always keeping our eyes open,’ and called on the Government to change its rules because ‘people want to come to London, but many don’t because they struggle with the visa regime.’ ”

How might agile fit into any of this? Certainly not in the union negotiations – not unless you change the collective bargaining process, but as they say, one should “pick one’s battles”. Certainly not in the lobbying of the government to change visa policies – that is an art that happens behind the scenes with little transparency (and that itself is not very agile and is a problem – but changing that is surely an even steeper hill to climb).

And one might presume that agile is not applicable in the consideration of possible acquisitions – or is it? Merger and acquisition (M&A) analysis is a highly complex financial and strategic analysis process, often supported by simulation models – along with judgment on the part of seasoned executives who have prior experience in M&A. Those kinds of decisions are not made using a “business model canvas” – there is too much at stake, and one cannot usually pivot if things don’t work out: it is game over – at least for the chief executive. Can agile apply to this process?

The kinds of complex financial modeling that these kinds of businesses do for an M&A involves defining multiple scenarios and creating a model for each, and often running simulations of the scenarios to account for external variables that might change over time (interest rates, costs, demand, and indirect factors that affect these) as well as various types of future events that would affect the outcome (e.g., a new competitor appears on the scene, or there is a labor strike). The parameters of these scenarios are subject to debate, as are the scenarios themselves. Collaboration between executives and the economic analysts would surely be very valuable, rather than trusting a team of analysts to come up with the numbers and merely present them as fact. High quality models should explicitly account for uncertainty, and that uncertainty is also open for debate, because this kind of modeling is an art – not a science. The scenarios are up for debate because a scenario presumes a strategy: strategies are defined as scenarios and then compared. Strategies could be cast in understandable terms, and then the details filled in by the economic modelers, with key parameters called out. Pivoting might even work in some cases: for example, an airline could try a new strategy on some routes before scaling up the strategy. However, if things have come to a point of crisis, there might not be time for trying things out or “failing early” – one might be forced into a situation of making an existential gamble.


Managing in a crisis is actually easier than otherwise, because people will shift all of their priorities without resistance: survival is at stake.

Iberia was clearly in a crisis: according to Sánchez-Lozano, “As well as halting Iberia‟s financial decline we will establish a viable business that can grow profitably in the long term.” Thus, the first element of the plan was to stop the bleeding, making cuts by “suspending loss making routes and frequencies and ensuring there is effective feed for profitable long haul flights.” This immediate triage required decisive executive action – an important form of leadership in a crisis but not always the best form for long term durable changes.

Managing in a crisis is actually easier than otherwise, because people will shift all of their priorities without resistance: survival is at stake. Things get more difficult when the crisis has passed. Enduring change for systemic problems is much harder to achieve. That’s why one must ask, How did we get here? Walsh said, “The boom years are definitely behind us, and I can’t see anything that will bring us back to those levels of growth.” So the environment changed: it was external factors in this case. Or was it? Why did Iberia not position itself for more resiliency? Airlines are highly competitive and operate on very thin margins, and Iberia has a union, so maybe it was not possible to build in a buffer for hard times. We cannot know from the outside.

Item 6 of the plan also gets my attention: new commercial initiatives. This is always a fertile area for agile methods – including the business model canvas. Another area that comes to mind is increasing efficiency, using Lean techniques. Especially given that the airline had to restructure, and implement mergers, there was surely an opportunity for collaborative management and the application of Lean methods for defining new and better ways to operate – perhaps even innovative non-hierarchical decision-making structures. And of course, having an IT function that is ready to execute with rapid delivery is the most obvious way to support business agility.

Even though much of agile has its roots in business, most people in the agile community today work in an IT setting and that setting is the bulk of their experience. If you are an agilist in an IT setting, and would like to advocate for the use of agile ideas in a broader business context, the question is, How should one engage with business stakeholders on these issues? Business stakeholders generally have years of experience in business operations and often have MBAs and financial training. They also often have market facing experience that provides them with judgment about external opportunities and risks, as well as profit-and-loss responsibility experience that grounds their judgment about operational risks and makes them very results oriented. An IT agilist seeking to have a dialog with someone from a business area on how to apply agile in a business context – rather than merely an IT software development context – needs to win the trust of the business stakeholder. That stakeholder rightly feels that they know a-lot and that they understand their business much better than someone from IT. Talking to them is therefore an opportunity to collaborate – not to teach.

A good approach is to express an interest and listen, and bring lots of humility. These people do not need to be told that if they would merely “go agile” that all of their challenges would be solved. Nor will they be interested in learning an entirely new vocabulary, so it is best for an agilist to learn business equivalents for agile terms wherever there is one. Instead of “velocity”, say “throughput”. Instead of “spike”, say “prototype”. Instead of “fail fast, fail early”, say “do a prototype”. Instead of “team happiness”, say “team morale”. According to Linda Berens, an expert on human agility and a partner in HolacracyOne, “Communicate in the style the client most likely wants and using the words they most easily understand.” [https://lindaberens.com/consulting/communicating-well-with-non-technical-people/]

Business agility is a complex topic and we need to be careful not to presume that agile – as understood and experienced in an IT context – has all of the answers for how to run a business. However, many of the ideas are greatly applicable. The best way to find out which ones is to start a dialog, show an interest, listen before you speak, and then share your own experiences. Business people need to learn about today’s IT as much as IT people need to learn about today’s business – they simply do not know what they don’t know (that applies to both camps) – but to get them to listen, you need to get them to trust you, and the best way to do that is to acknowledge their experience, knowledge, vocabulary, and points of view. 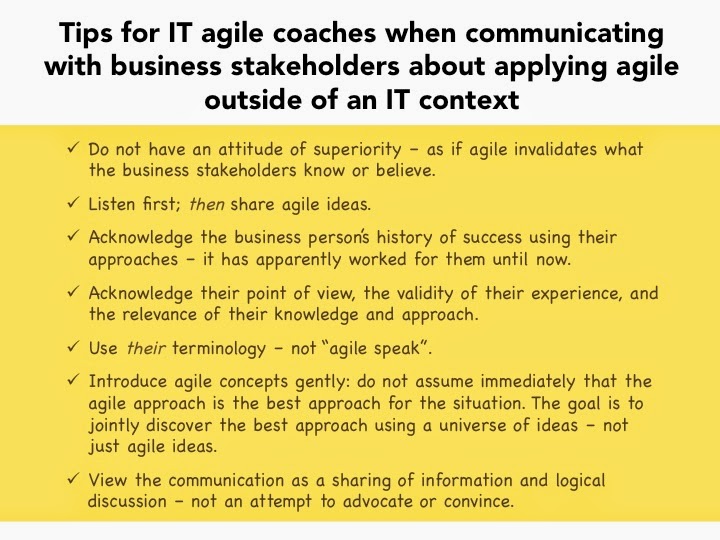